At first watch, Kyoukai no Kanata ED (by studio Kyoani) left me amazed with its bold move of having a singular pose for most of its storyboard. It’s definitely a challenge to limit the storyboard to mostly one pose while still being able to keep the whole ED interesting and making that one pose meaningful. Full OP Youtube link.

To make the ED visually engaging while keeping to one pose, Kyoani varied the backgrounds and camera angles. The backgrounds in particular were beautiful and worthy of appreciation, depicting the stars, sky, snow and more.

Having the ED be pretty isn’t enough, as for the one pose storyboard to be effective, there must be significance behind the pose. After watching the series, I’m glad to find out that Kyoani has managed to do that.

In the show, Kuriyama Mirai was ostracized by society due to her cursed blood lineage. The other people in the story only care about her as a potential threat, and Mirai had no friends or family. Over the course of the story, Akihito develops a friendship with Mirai, and they eventually grew closer together.

In the ED, we see the portrayal of the ostracization of Mirai by how she reaches her arm out for most of the show, yet everyone else is ignoring it and never acknowledges her. The ED depicts Mirai holding out her arm through many seasons and sceneries, to no avail. The other characters in the show turn up only to ignore and walk past her.

Near the end of the ED, Mirai looks up in surprise and breaks into a smile. We see Akihito facing Mirai, signifying that he has accepted Mirai. We also see the light of dawn coming upon both of them, symbolizing a new beginning for the both of them. Akihito subsequently reaches his hand out to Mirai. 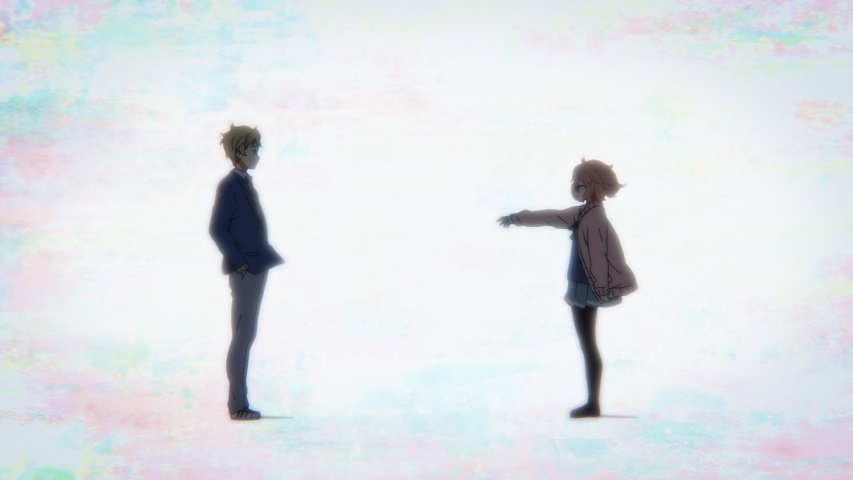 Bonus: if we go frame by frame at the start and the end when the hands are raised, we actually observe that the hands belong to several people, instead of just Akihito and Mirai. It tells us that the people who accept Mirai are not just Akihito but also the rest of the cast.