I have talked about the main features of an OP and ED that make them exceptional. In this article, I shall be talking about a couple of details that puts the shine on them, with the help of two EDs from GJ-Bu, ED1 (youtube) and ED4 (youtube).

OP/ED sequences consist of the video and the audio, but they should be more than a sum of its parts. To achieve that, the action and the song must be entwined and complement each other. One basic rule is that the scene changes should be aligned to the start of a song line. Actions that are in sync with the rhythm or the singing will enhance the experience.

GJ-Bu ED1 is full of this effect. Referencing the youtube video linked, here are some of the better synchronized parts listed:

As a whole, the OP/ED song should feel like it was made for the video sequence and vice versa, and not one for the other. Another example of a perfectly paired song/video is the first 20 seconds of Jinrui’s OP.

Credits inevitably have to be placed during OPs/EDs, but animators should not take the easy route and plop them right in the middle of the screen. In GJ-Bu ED1&4, we see deliberate efforts to place credits away from the action, and in the empty spaces. In the ED4 video example, the credits were shifted for the action that happens a whole 4 seconds after the credits appear. 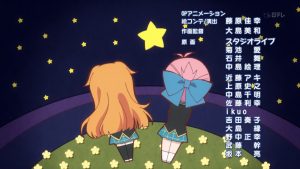 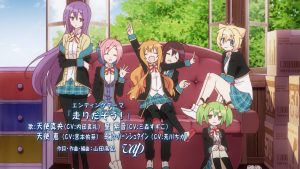 To go a step further, there are also instances where credits were integrated right into the scene itself, like in SoreMachi. 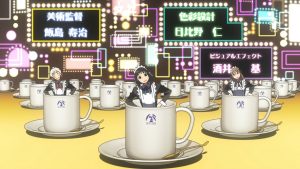 Proper pairing of video sequences and song can make the OP/ED so much more enjoyable. Animators can put in the final touches by styling the credits away from the action, or integrate into the scene itself.